As an established International voice-over agency, Matinée Multilingual has been providing a professional Arabic Voice-Over Service and Subtitling Service for over 25 years. We offer a selection of the very best Arabic voice talent, at a price you can afford.

Whatever you need it for, we’ll help you select the best Arabic voice for the job. We can record wild or sync to picture, and deliver the audio back in the file format of your choice, same day, via FTP. We can also lay-back the audio onto your video, and re-work the captions where necessary.

To calculate Arabic voice-over fees and recording costs click here.  You will also find a lot of technical information here on our FAQs page.

To check the availability of our Arabic voice-artists and to confirm costs, please contact us using the quick Quote form opposite, and we’ll respond within one hour. Or you can email project@matinee.co.uk or call on+44(0)118 958 4934. 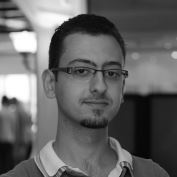 Amr
Amr is a professional Arabic voice over actor. He has worked with many worldwide companies and organisations, and has a great experience in different voice over genres. Read more... Rawan
Rawan is a professional female Arabic voice-over artist with a native Levantine accent.  She is also fluent in English and has recorded English voice-overs with Arabic accent. Read more... Mohamed
Mohamed is a professional Arabic voice-over and has great experience in this field and works with the agencies largest advertising in Egypt and worldwide. Read more...

Microsoft required audio-visual translations of their Skydrive promo video in 38 languages, including an Arabic version. And because Matinée are both an Arabic voice-over agency and an Arabic captioning company, Microsoft’s translation partner – Lionbridge, selected Matinée to handle all aspects of the video translation work.

First we undertook a review of the Adobe After Effects and Final Cut Pro video files, to work out the best approach for the Arabic video translation work. Then we produced an audio transcription, to include both a time-coded voice-over script, and the on-screen captions. Lionbridge produced all the translations and DTP work. We cast and recorded one native Arabic voice-over artist, taking care to match the existing time-constraints as closely as possible.

Our engineers integrated the Arabic translations, graphics and Arabic voice-over into the supplied source files, adjusting the animations to match the new Arabic voice-over track. The final Arabic video was encoded as an H264 MP4, ready for publishing on Microsoft’s portal.

A short history of the Arabic language Arabic, the largest member of the Semitic branch of the Afro-Asiatic language family, is spoken throughout Northwest Africa and the Middle East. The spoken language consists of many varieties, which have all descended from Classical Arabic dating back to the 6th century.

Classical Arabic, in which the Qur’an is written, remains the formal version of the Arabic language. It is still taught in schools and used by religious scholars.

Modern Standard Arabic (MSA) has evolved – as the name would suggest – as a modern, standardised version of the language. It is widely understood across the Arab world, and used to teach Arabic as a foreign language, as well as by the media and politicians.

Colloquial (or dialectal) Arabic is the everyday spoken language, which has a great many regional variants. These can be mutually unintelligible enough to be considered separate languages, although this is a very contentious issue (many Arabs profess that they speak a single language). Read more

Which countries have Arabic as a national language?

How many people speak Arabic as their first language?

As there are so many different varieties of Arabic, it’s hard to pin down just how many people speak it as their first language, but estimates range from 200 to 400 million. This makes it around the fifth or sixth most spoken language in the world.

Here are some recent figures for the top five most widely spoken dialects:

This diverse – and largely Arabic-speaking – part of the world is most famous for the production and export of oil. The oil industry has a major impact on the economies of all Middle Eastern countries, both through the revenue it generates and the movement of labour through these countries.

Due to the fluctuating price of oil, most Middle Eastern countries are also investing heavily in new industries, so that they are not overly reliant on the oil industry. These include banking, tourism, manufacturing and agriculture.

However, the instability caused by the 2010/2011 Arab Spring uprisings has put a major brake on development. A report from HSBC in October 2013 predicted that at the end of 2014, the GDP in the seven worst-hit countries – Egypt, Tunisia, Libya, Syria, Jordan, Lebanon and Bahrain – would be 35% lower than if the uprisings had not happened.

So… you’ve been given a quote for voice-over, and it includes costs for cleaning and editing the audio.
But what does this mean? And why do you need the audio edited and cleaned? This video will explain all.